8 Reasons Why You Should Visit Disneyland Disneyland in California is where it all began, it’s the only park that Walt Disney opened and dedicated himself.  It was a challenging opening with many issues on that day, but it has remained a constant site of magic in Anaheim since 1955.

Below are the top 8 reasons that I love Disneyland!

Walt Disney World (WDW) has the Keys to the Kingdom tour that I have done many times but this tour had something that WDW didn’t – Walt himself.  Throughout the tour there were many stops along the way where we stood in the park and listened through our earpieces to Walt’s own voice talking about the very place that we were standing in. As we listened to his dedication speech, there were quite a few misty eyes in the group and I found myself covered in goose bumps as we walked in his footsteps.  The tour was an additional cost to the park admission, but worth every penny.

Before there was Mickey – there was Oswald.   Oswald made his debut in 1927 as one of Walt’s first animated stars and he signed a contract with a distributor who brokered a deal with Universal.  During contract negotiations the following year, Walt discovered that he no longer owned the rights to Oswald.  It was on that train ride home that a devastated Walt Disney first drew Mickey Mouse.  In 2006 Disney regained the rights to Oswald and he now appears at Disneyland! The fact that this lucky rabbit came before Mickey felt like such a big piece of Disney history – I was thrilled to meet him and have my picture taken. 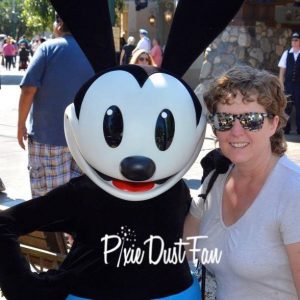 What can I say? Cars Land was incredible! I love Be Our Guest restaurant at WDW because it makes you feel like you are right inside the movie – Cars Land has the same feeling on a grander scale!  Walking up Route 66 and approaching the Cadillac Range mountains while passing Flo’s Café – it doesn’t get any better!  Radiator Springs Racers was such an immersive experience; I don’t think it could have been any better! 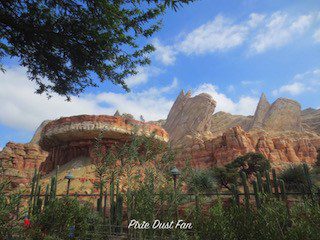 The Haunted Mansion in Disneyland gets transformed for Halloween for Tim Burton’s The Nightmare Before Christmas – it was ghoulishly fun to see the additions of these characters in to the already wonderful mansion.  The Hatbox Ghost who originally made a short appearance in the mansion in 1969 has materialized again and is one of the 999 happy haunts that live there. Remember though…there is room for 1,000 and they’re always looking for volunteers!

Fantasmic was a similar show to WDW, but it had some very different elements.  The first noticeable difference was that due to the size of Disneyland, I felt much closer to the show than I do at WDW since we usually sit near the back of the theatre for an easy exit.  At Disneyland they had Peter Pan instead of Pocahontas – that was awesome! It was a giant pirate ship with Peter, Wendy, Captain Hook, Smee and all the others fighting on top of the masts. I have to say – I was impressed! The dining experiences at Disneyland were delicious!  We made reservations to eat at the Blue Bayou (inside the Pirates of the
Caribbean) as well as the Carthay Circle Restaurant in California Adventure – both were terrific experiences and the food was tasty. The rest of the week we dined on more quick service options with our favorites being the Corn Dog at the Corn Dog Castle and the Mac & Cheese at the Cozy Cone Motel. There was quite a variety of different quick service options throughout both parks that we were pleasantly surprised by how good they were!

We stayed at Disney’s Grand Californian Hotel & Spa in a standard view room. The hotel was gorgeous and had it’s own enterance to the California Adventure park for hotel guests only. The proximity to Downtown Disney as well as Disneyland being a short walk away were terrific for an afternoon break from the parks.  We did walk over to check out the Disneyland hotel that hosts Trader Sam’s Tiki Enchanted Tiki Bar as well – highly recommend stopping by for a drink here! By far my favorite experience at Disney’s California Adventure was the World of Color show. Neil Patrick Harris and Mickey Mouse hosted a 22-minute show of lasers, lights and fountains that told the story of Walt Disney. The show paid tribute to Walt and his imagination while highlighting all of the magic that has since been created because him.  The World of Color allows younger generations to learn about Walt Disney and be inspired by his determination, dreams and imagination. 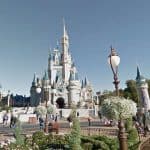