Avatar Flight of Passage was an attraction that I was determined I had to try. The reviews said that it was not good for those with motion sickness and it could be intense, but I had to experience it at least once. Since I had the opportunity to visit during a preview before the official opening, I went straight over to Flight of Passage and there was no wait. I stood for a second, took a deep breath and thought, “I guess I’m doing this!”

Here are my thoughts on the new Flight of Passage at Disney’s Animal Kingdom.  It’s an overview of my experience with some information you should know before you go, but without too many spoilers!

The queue was impressive – but long

The outdoor portion of the queue for Flight of Passage is gorgeous. You’re walking slightly up hill and have a perfect view of the floating mountains. There will be some great pictures and selfies taken from this line!

Once you leave the outdoor area, you enter in to something that looks like a cave. You will be happier in here since there is air conditioning and shade from the Florida sun. As the cave transitions in to the building, you’re able to see paintings, a bioluminescent mining area and of course – a real Avatar. I had seen the Avatar on many different online videos, but I didn’t appreciate the size or details of it until I had seen it in person.

Sneak peek: Avatar Flight of Passage features one of the most detailed queues @WaltDisneyWorld Resort! pic.twitter.com/MlFnNpkavR

While I didn’t have a wait for Flight of Passage, it struck me as I was walking through this queue how long it took me to get to the end. It seemed like quite a long walk with the capacity to hold VERY long lines.

Nearing the end of the line, you enter the first of 2 pre-shows. The first room is where you are matched to your Avatar. It is primarily a video with some special effects, but the room felt a bit small to me. I was glad I was the last one in and had some space behind me. We were in there a few minutes when we moved on to the next briefing – the vehicle seating system is explained and you get your 3D glasses.

I don’t like feeling ‘trapped’ anywhere and this was my biggest fear for this vehicle. I am the person who sits at the end of the row in a movie theatre to avoid feeling like I can’t get out. Knowing that things would come and encapsulate on this attraction had me very nervous. I straddled the vehicle like a bicycle and leaned forward towards the support in front of me. I chose to leave a little bit of space between the support and myself and prepared myself for the various restraints that were coming. As the restraints were activated, I heard the man beside me gasp a little. The man had leaned so far forward that the restraint at his back was way too restrictive and a cast member had to come and adjust it.   I was happy with the amount of space I had and didn’t feel closed in with the back restraint at all. Maybe it’s because I had my legs out in front of me as opposed to at the side, but I didn’t even feel the ones on my legs at all. I did notice that this might be quite restrictive and uncomfortable though for my Pooh-sized friends. There is a test vehicle outside of the attraction for you to try before waiting in line.

Once the ride started I was in awe. Disney has created an attraction where I really FELT like I was flying on the back of a Banshee. It wasn’t just the sights, sounds and smells, but when my Banshee took a break on a branch of a tree, I could FEEL it breathing underneath me. The scenery is breathtaking and colorful, it seemed so real! There is no comparison in my mind to Soarin or Star Tours – this attraction made me forget that I was sitting on an attraction vehicle with 3D goggles on. I was transported, and I flew on a Banshee. I feel sick on Star Tours and have never made it back on Mission Space since it opened; I was worried about Flight of Passage. I went first thing in the morning, took some motion sickness pills and didn’t eat anything before the ride. There were a few moments where the Banshee took some sharp turns and some drastic drops where I had to close my eyes. Closing my eyes for a second or two really helped, especially when were flying through some tight spaces. I do think the cool breeze on my face helped me avoid overheating that happens when I’m nauseous. I really didn’t feel sick at all, I suspect that might have had something to do with the pills I took.

The 4 things you need to know:

My only criticism, and it’s a big one Surprisingly, this attraction is not friendly to certain body types or guests with mobility issues. Given that this is new, I would have thought that Disney would have invested in making sure that more people could experience it – not less. One of the things that I don’t like about that ‘other park’ is that they have attractions that are not suitable for my Pooh-sized friends. I have always maintained that having the test vehicles out in front of their attractions is both humiliating and degrading to those who want to try them before lining up. Couldn’t they put them around the corner out of plain view of the masses of people? Who wants to try a vehicle in front of a bunch of people to see if you’re too fluffy to fit? I have always thought that was a big difference between Disney and the other guys, until Disney did the same thing with Flight of Passage. I think it’s terrible that a good portion of the population wasn’t accounted for when designing this attraction. I only hope that Disney makes the necessary adjustments to the attraction to accommodate more people, and once again set itself apart from the other parks.

If you want to see a good video of the queue – check out this video from our friends at Pure Magic Vacations!

Have you experienced Flight of Passage? What did you think?

Connect with
I allow to create an account
When you login first time using a Social Login button, we collect your account public profile information shared by Social Login provider, based on your privacy settings. We also get your email address to automatically create an account for you in our website. Once your account is created, you'll be logged-in to this account.
DisagreeAgree
2
1
2
2

Connect with
I allow to create an account
When you login first time using a Social Login button, we collect your account public profile information shared by Social Login provider, based on your privacy settings. We also get your email address to automatically create an account for you in our website. Once your account is created, you'll be logged-in to this account.
DisagreeAgree
newest oldest most voted

[…] order to experience Avatar Flight of Passage you need to ‘fit’ on the vehicle.  I say “on” because it’s like a motorcycle where you […]

I am a very petite woman and have been on this ride several times. The last time, though, the restraints were so tight I could barely breath. When I asked a cast member whether he could loosen the restraints up a bit, explaining that I could barely breath, the cast member simply replied that if I could talk, I could breath, and that there was nothing he could do to help me. There was no way I would last for the entire ride restrained the way I was and sadly, I had to leave.

Oh no – that’s terrible! If it’s that tight that it’s uncomfortable – I wouldn’t ride either! 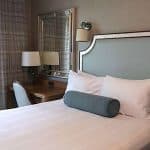