Life lessons growing up in the Disney Renaissance era

On podcast episode 70 Carrie and Francine explore the Disney Renaissance era, did you know this was a thing?  This 10 year period between 1989 and 1999 brought about a whole new generation of Disney fans who were first introduced via movies like The Little Mermaid, Beauty and the Beast, Aladdin  and The Lion King.

According to Wikipedia “The Disney Renaissance is the period from 1989 to 1999 during which Walt Disney Feature Animation returned to producing critically and commercially successful animated films that were mostly based on well-known stories, much as the studio did during the era of Walt Disney during the 1930s to 1960s.”

While Carrie and Fran explore what it was like growing up during that time, guests Ashley and Cheryl share the life lessons they learned from the movies.  It’s a fun conversation about how they became Disney fans and how each generation views it differently.

Hear the virtual hide and seek on Podcast Episode 43 where Francine hides in all her favourite places!

Support Pixie Dust Fan by shopping at Disney and Amazon

I have resort tours on YouTube as well – check out my channel!

Don’t forget to sign up to stay in touch with Pixie Dust Fan news! 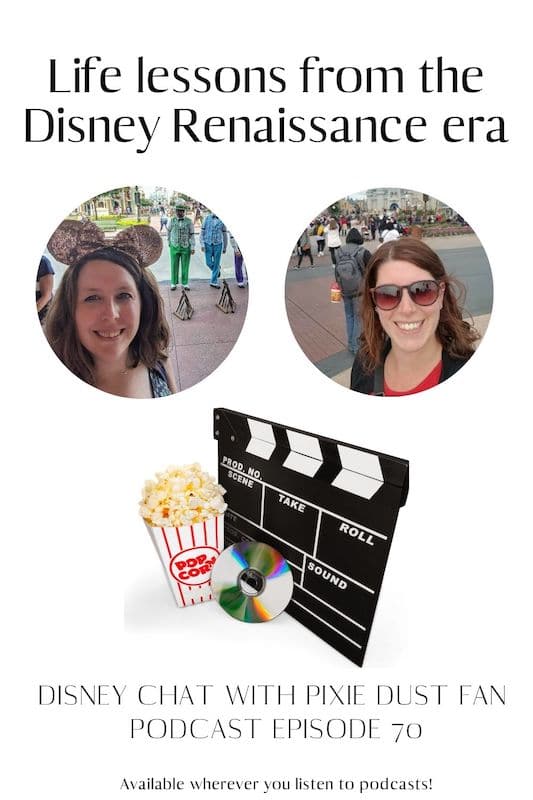 […] and listening to another episode of the Pixie Dust Fan Podcast. This was episode number 70, “Life Lessons From Growing Up in the Disney Renaissance,” and it really got me thinking about how important some of those films were to me as a young […]